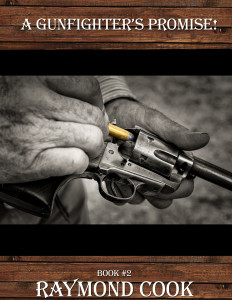 A Gunfighter’s Promise is a 233-page story about a gunfighter by the name of David Liley. At age 18, he left his mother, father, three brothers, and two sisters and set out on his own, relying on his gun hand to make a living and a reputation for himself. James and Elizabeth Liley were constantly worried news would come that David had been killed or was in some jail accused of murder.

But they also knew there was nothing they could do but pray he one day would come back home. Jim, Patrick, and his brother Curt ran a sawmill business with their father on their ranch just outside Marble, Colorado. Their sisters, Karen and Cheryl, helped their mother around the ranch, raising hogs and chickens, growing a huge garden and apple orchard which provided them additional income selling                  vegetables and fruit in town.

Shortly after David returns home; his father and brother Curt are ambushed and murdered. After the posse following the trail of the killers are found murdered;       David, Jim, and Patrick along with a neighbor; Sam Bates are deputized to hunt down their families killers. One day, when David stops an angry mountain man who is beating a woman to death, a gunfight ensues, and David has to kill him.

When David’s friend, Sam Bates is jumped by horse thieves and turns up missing,    David tracks the horse thieves to their camp after being jumped by a large cougar, and a gunfight ensues. David settles down to his new life as a husband, rancher after Pamela gives birth to his son. One day a gunfighter comes to Marble and confronts David in the street to find out who really is the fastest Gun. After that gunfight,  David must choose between his life as a gunfighter, and that of a husband, rancher, and   father.

5-Star Book Review By Christian Sia  A Gunfighter’s Promise is the second book in a series by Raymond Cook and it is a great offering for fans of Westerns. David Liley believes his destiny lies in his gun. He is just eighteen when he leaves his parents and siblings to craft a life for himself. And he relies solely on his gun fighting skills, a       decision that leaves James and Elizabeth Liley, his parents, constantly worried about what may happen to him. But David eventually comes back home to meet with tragedy. His father and brother, Curt, who run a sawmill business, are                ambushed and murdered. David finds himself pulled, together with Jim, Patrick, and Sam Bates, into a quest to avenge the murders. Will he find the murderers?

This novel is packed with action and I enjoyed how the scenes are written. They are focused and the points of view come out clearly. There is a lot of gun fighting in the novel and while it focuses on David’s skills with the gun, the author develops         powerful themes of family, of life on the ranch, and the theme of love. David is a compelling character and the reader will enjoy following his internal journey, torn between settling down with his family or following the thrill of the gun fight with all the risks associated with it. But his wife, Pamela, will make him choose, and in a way that will thrill readers. Raymond Cook creates riveting scenes and the descriptive power of his prose is one of the things I loved most about the writing. The setting is explored in great detail and in a way so that the reader feels as though they are       walking along with the characters. A Gunfighter’s Promise is a gem for fans of          historical fiction and tales of the Old West.

A Gunfighter’s Promise is an action-packed western frontier eBook. This eBook was uploaded onto Amazon on August 31, 2012. I’ve made this comment section so I can share with visitors to my website what readers feel about this particular eBook. To share your comments too, just go back up to the top of the page and click on the Contact Me tab.

This story continues from “Was It Fate Or Destiny” introducing you to other inhabitants of the Crystal River Valley in Marble, Colorado. James & Elizabeth Liley travel from Independence, Missouri to take up residence just outside of Marble. They have six children, Jim, Curt, Patrick, David, Karen & Cheryl who all work on the family ranch. David has left becoming a gunfighter & after two years decides to hang up his gun & take his place beside his family running the ranch & saw mill. Early on as their father Jim & brother Curt are taking a load of lumber into Marble they are murdered. It’s up to the three remaining brothers and neighbor Sam Bates to find the killers.

I very much enjoyed the segment with Sam’s encounter with the Ute Indians.
This was an extremely clean book as all of Mr. Cook’s books have been so far & I would recommend them to anyone desiring a good western read. You are definitely encouraged to read these books according to the publish dates as it will give you the background of the town of Marble & it’s residents because otherwise it’s bit confusing. Love this author & he delivers a superb look at the old west.