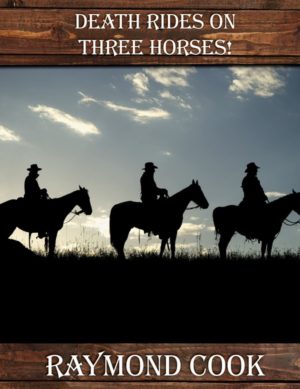 Death Rides On Three Horses by Raymond Cook is a 217 page story about Annie Coulter, the wife of a gunfighter by the name of Daniel “Big Dan” Coulter who bought a homestead in the Crystal River Valley outside Marble, Colorado in 1877. For three years they both worked the land raising cattle and horses. Daniel had tried to leave his past life as a gunfighter behind. But reputations have a habit of following a man even years later, especially when it came to killing someone’s friend.

In 1875, while in the a Brodie, California saloon called The Double Eagle, another gunfighter by the name of Bill Martin pushed Dan out of the way as he entered the saloon and a gunfight ensued. Bill was fast, there was never a doubt in anyone’s mind, but “Big Dan” was faster. Three holes in the chest of Bill settled the dispute. Sometimes those who died had relatives or friends who chose to take revenge against the one who walked away alive.

In this case, Bill Martin’s brother and 2 friend’s set out to even the score. When they rode back into Brodie three weeks later from a cattle drive and learned of Bill’s death, the three men set out to find Dan Coulter if they had to search three states to do it. After finding “Big Dan” on his ranch outside Marble they kill Dan and beat and rape Annie. The problem was…. they let her live. After she recovers from her             injuries  Annie finds someone to train her how to use a gun and her speed is deadly. Now she sets  out to track down the man who murdered her husband and attacked her.

By Deborah Lloyd on November, 4, 2018 The Wild West was an era when gunfighters and other outlaws were a common phenomenon. “Big Dan” Coulter had been a gunfighter, and he killed Gene Martin in Brodie, California, in 1877. Although Dan gave up this lifestyle and settled down in Marble, Colorado, his past followed him there. Dan married Annie Sinclair, and they bought a ranch outside Marble. They became close friends with two neighboring families, the Liley’s and the Bate’s.

Three years later, Gene’s brother Andy Martin, Buckskin Mark and Adam Banks murdered Dan, and beat and raped Annie, leaving her for dead. However, Annie recovered and set out to find the three men to exact revenge for their horrific acts. In Death Rides on Three Horses Book #3, written by Raymond Cook, an exciting tale of      Annie’s adventurous plan unfolds. Although her many friends in    Marble were not sure if they would ever see her again, they          supported her desire to avenge Dan’s death.

This story depicts the harsh life that existed in the Wild West for    several decades. There are many gunfights, saloons, robbers and other outlaws, freezing winter weather and difficult traveling          conditions. And, there are also caring neighbors who will extend a helping hand and nonjudgmental support when needed. The author has clearly illustrated these paradoxical factors, as settlers found both joy and heartbreak during this era. The characters in the story are well defined, and the reader feels as if he/she has met each one in person. The tale flows smoothly, and the book is a quick read.    Author Raymond Cook has written an engaging story in Death Rides on Three Horses Book #3.

Death Rides On Three Horses is an action-packed western frontier eBook. This eBook was uploaded onto Amazon on January 31, 2013. I’ve made this comment section so I can share with visitors to my website what readers feel about this particular eBook. To share your comments too, just go back up to the top of the page and click on the Contact Me tab.