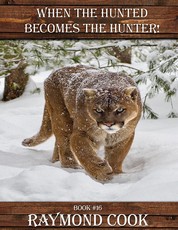 When The Hunted Becomes The Hunter eBook #16

When The Hunted Becomes The Hunter eBook #16

When The Hunted Becomes The Hunter © 2014 by Raymond Cook is a 208-page    story about people living in and around the small mining town of Marble, Colorado. The town was formed in 1881. By 1899 the town had grown to over 400 people half of whom worked at the Yule Marble Quarry just outside of town. But with more and more      covered wagons of families arriving to stake their claim to 160 acres of land there came risks. Freezing to death in the winter was just one risk they faced.

There was also the risk of cholera, smallpox, attacks by scattered bands of Shoshone Indians who hated the white man deeply, murders by horse thieves or cattle rustlers as well as the unstoppable grizzly bear. Wolves howled under the light of the full moon and prowled ranches at night, hoping for a quick meal out of a goat or         chicken. But neither put fear in the hearts of a husband or wife more than seeing cougar tracks in the dirt near the outhouse.

This seven foot long predator was quiet as a mouse and rarely seen. Come nightfall everyone headed for the outhouse together under the protection of a Winchester    rifle in one hand and an oil lamp in the other. As more and more ranchers built their cabins in the middle of cougar country, sightings occurred more frequently. As hard as groups of men rode through the mountains and valleys looking for the large cat, it was as elusive as a ghost.

This book chronicles the life and times of families struggling to survive in the            Colorado Territory facing untold dangers. After a cougar hurts its rear hip trying to bring down a deer it finds it can’t hunt prey anymore. It’s only chance to survive now is to hunt men, women and children. Take a trip back in time with me, and relive the trials and challenges facing early pioneers.

Reviewed by K.C. Finn on November 21, 2018. When The Hunted Becomes The Hunter is a realistic work of western fiction written by author Raymond Cook. Set in the mining town of Marble, Colorado at the turn of the twentieth century, this overcrowded area is getting busier by the day as families arrive to homestead, or work at the Yule Marble Quarry to earn a living. As overcrowding causes disease and              potential famine, there is still one thing that the settlers here fear more, and that’s the sight of a deadly cougar in their midst. When one such cougar finds it has no choice but to hunt men, women and children for its survival, families struggles for survival, living in the middle of the animal’s hunting territory.

When The Hunted Becomes The Hunter was a chilling and realistic read. Author    Raymond Cook has created a superbly exciting Western yarn that really takes you into the true atmosphere of the world of the early pioneers and what they had to face even just to survive on a daily basis. The cougar at the heart of the tale makes a deadly foe, showcasing the uncontrollable power of nature despite man’s best        efforts to kill it. The lives of the families who have come to Marble to make their       future brighter are harrowing to read about. This is evidently a well-researched     novel by an author who shows clear passion for the subject. Overall, When The       Hunted Becomes The Hunter is an evocative and enjoyable read, and will appeal to fans of action, adventure and historical fiction stories.

When The Hunted Becomes The Hunter is my newest action-packed western frontier eBook. I’ve made this comment section so I can share with visitors to my website what readers feel about this particular eBook. To share your         comments too, just go back up to the top of the page and click on the Contact Me tab.