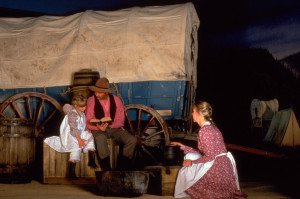 Television shows like Bonanza, The Virginian, Wagon Train, The Big Valley, The          Rifleman and the High Chaparral, ‘romanticized’ life out west. The reality of living out west in the late 1800s was that of life and death. Many towns didn’t have a sheriff or town marshal to maintain law and order. Often times unscrupulous wealthy men ‘paid’ off a lawman or appointed a ‘gunman’ who enforced the law for the rich and greedy businessman. There was no ‘prosecutor in the pioneer days.

Outright lies, false witnesses alleging someone committed a crime were common place with the intent of getting someone hung because an individual or                      businessman opposed him. For example, perhaps a rancher owned land next to a lake and refused to sell out to a cattle baron. Outright murder, driving him off his land or perhaps kidnapping his wife or child to force him to sell out was the ‘rule of the day. Stealing cattle or horses were hanging offenses as was bank robbery.

But something just as dangerous as unscrupulous men faced every pioneer family. That was ‘basic survival.’ The weather in the Colorado territory was short and brutal. Only the strongest survived the bone chilling cold and heavy snows. If a family ran out of firewood or their roof caved in they perished. Weather was just one challenge though. There were Indians to deal with though most just wanted a cow, food or blankets.

Then there was the need to break ones backs to grow and can enough food to last a family through the winter. Wildlife such as deer, raccoons, mice and rats many times destroyed garden crops during the night. Bears, Cougar, coyotes, hawks and wolves did their best when the opportunity was there to kill livestock such as chickens, goats, horses, pigs and cattle. The soil a farmer worked to plant crops wasn’t always fertile and their well wasn’t always deep.

Cholera and measles as well as a long list of illnesses and injuries, miscarriages or deaths during childbirth was common. Few towns had a doctor and many ranchers lived far from a town. In mountainous areas, roads many times were blocked by landslides taking many men with saws and ax’s to clear fallen trees, boulders and soil. Many families weren’t rich like the ‘Cartwright’s on Bonanza who bought          anything they wanted. Ranchers worked the land from sunup to dusk trying to make a living. They sold what they could and bartered or traded with neighbors. The town’s general store had a credit ledger for people that were able to buy provisions on credit.

Town cemeteries were always being made larger due to the arrival of saloons. Not only did saloon owners water down whiskey to make their supplies last and make more money but the prostitutes played a part too in having men killed. Beer went for a nickel and whiskey for a quarter a shot. Gambling was a major source of revenue for saloon owners. The card dealer more often than not was crooked and roulette wheel rigged. A drunken minor or land owner could easily be conned into putting up the deed to his ranch and losing it. The loss of that deed turned a poker game into a gun battle with the drunken man being the next customer for the undertaker. Towns cemeteries were filled with graves, both marked and unmarked of men, women,     children and strangers no one knew.

Brothels, whores working in a saloon or out of a boarding house were common place in most towns on some level, catering to ranch hands, miners, single men and of course husbands. Out west there was a far greater number of men and a shortage of women. The cost of a ‘roll in the hay’ was one dollar. Many women had twenty or more customers a day. They worked long hours, and their share of that dollar was small. A typical ranch hand was paid $20 a month with room and board. A good looking whore though could make several hundred dollars a month, especially if the drunk customer passed out and she stole what money he had on him.

A man fast with a gun had a number of jobs he could take to earn a living. He could be a lawman, stagecoach guard, bank guard, a guard for the wealthy mine owner or cattle rancher afraid someone would harm him or his family. He could also work as a bounty hunter hoping to catch up with someone wanted by the law with a price on their heads. That money most often was hard earned. If the reward offered was dead or alive the bounty hunter often times would outright kill the wanted man. But if the reward was payable when he was returned to the town the sheriff posted the reward, there was greater risk to the bounty hunter.

Many times, either due to greed or desperation after having lost everything, men turned to robbery, kidnapping and hold-ups for a living. Some men or for greater success, ‘gangs’ they could choose to rob but not harm anyone or murder the          witnesses. So there was a constant tug of war between men breaking the law and men trying to maintain law and order. Violence was so common place that a          gunfight could ensue over the smallest of disagreements. A dead man might lie in the main street for hours without anyone making the effort to drag him out of the street.

The stories I have written try to reflect what life was really like in the pioneer era with the hopes of giving you the reader an insight into what life in the Colorado territory was like. I am grateful to have found my calling as a fiction writer in 2011 and hope the eBook you purchase and read will be enjoyed. Though these stories are ‘fiction’ I have also tried my best to make them historically accurate when possible.