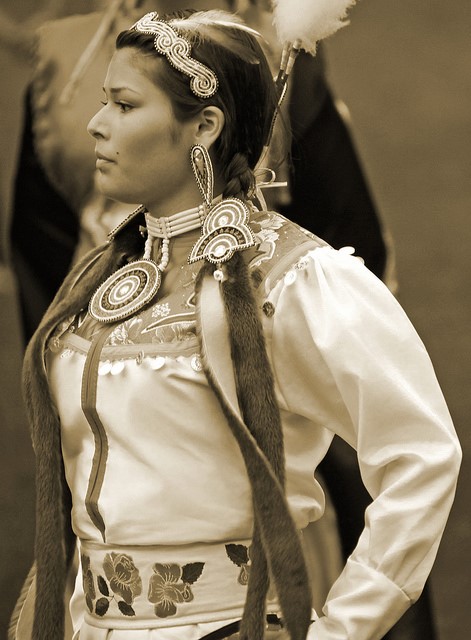 Permission to use this photo is deeply appreciated. To enjoy more of Bobby Binguis’s outstanding Native American Photography, please check out his Flickr Photography profile at:

As I Looked Down From The Ridge!

As I look down from the ridge
a wagon train passes below
Escorted by the U.S. Calvary
as they take our lands

My people are as scattered as
the Tatonka upon the plains
They are slaughtered for their
hides, leaving the meat to rot

The buffalo were once heard
thundering past our village
For three moons they thundered
past, their numbers uncounted

But the buffalo, the deer and even
my people’s hope is gone
We suffer and starve to death
hunted by the pony soldiers

Why could they not come in peace
and let us live out our days?
My people are tired of running and
too weary to fight back anymore

No Longer Free To Roam

Below me deer grazed, yet always
on the alert
As a pair of beavers did build their
dam of sticks and dirt

The red-tailed hawk shared the
sky with the clouds
And yes, I heard the distant howl
of a lone wolf proud

There Were Once Millions

They hunted not for sport, not for
their heads and hides
They hunted to feed and clothe
their families, living in peace

They fought back against those who
killed their people as women wept
We had to have their land, their gold
we made them suffer and starve

It Was A Harsh Winter

For the Blackfoot Indian’s it was
a long, harsh winter
The Tatonka had long since been
killed by the whites

Famished, ill-treated, yes even their
children were spat upon
And so it came to pass one night
that they made their escape

Gathering all who could walk or ride
a horse, they headed home
Death was but a whisper away as
they made their way north

The U.S. Calvary were following
closing the distance they knew
Behind them they left the bleak
reservation meant for certain death

By 1870, the Tatonka were all but
wiped out by the white man
The Lakota nation located in the
Black Hills contained gold

Once it was discovered, it was only
a matter of time
Before the soldiers with their
cannons rained death upon them

The Laramie Treaty was to ensure
the Plains Indian’s safe passage
But once more, they realized that
white man spoke with forked tongue

An entire people, a way of life that
centered on family, on peace
Cost the lives of thousands of
men women, children and the aged

At the battle of the little big horn
Indians joined to fight back
But in the end, the Lakota Nation
like those before them, surrendered

Famine, poor health and apathy
took lives one by one
60 Billion dollars in gold the white
man stole from the Lakota’s

Over and over, the Lakota reservations
were made smaller and smaller
As the greed of the white man for land
and gold grew and hope flickered

Few of us white people will ever really
grasp why despair strangles a nation
Not just the Lakota’s, but for every
nation we tried to destroy

I’m but a small voice, a whisper in the
winds and I hang my head in shame
Every Indian Nation, whether large or
small deserves to grow

It Was A Sad Day For His People!

Chief Greywolf led his people, those not slaughtered by the U.S. Calvary, three days ago across the North Dakota plains slowly. What was left of his people consisted of fourteen braves, thirty-one women, eight elders, and 11 children. The women wept, arms held up to the skies wailing as the sun rose higher. Though they cried, their tears had long since gone dry. There was no hint of danger that morning as all but a few were still asleep.

Those standing guard were the first to die as the soldiers rifles were drowned out by the roar of cannons. The sounds of death whistled through the air, taking the lives of men, women and children. So many of us were killed and still they fired upon us. We were not fighting the pony soldiers. Our hands were held high into the air as others waved the white flag of surrender. As women ran to grab terrified babies running or wandering in a daze, splattered with blood or dirt, their mothers fell to the ground, dying.

Even when they lay motionless on the ground, they were shot again. Chief Greywolf was our leader, the father of his people and as everyone searched for him with their eyes, he waved for us to flee. Tee pees were burning and the smell of death was everywhere. As I looked into his saddened eyes, I saw despair and tears. “Why were the soldiers attacking?” I shouted to him over the roar of the cannon’s on the hill behind us?

Chief Greywolf had met with Captain Brooks, the commander at the fort, 30 miles to the east, three moons ago. He agreed to give up the lands that have been ours for as far back as the stories have been told. We were to arrive at a reservation under the protection of the U.S. Calvary. We had no rifles, only the bow, tomahawk and knife. We wanted to leave in peace.

In the midst of all the smoke and anguished screams, Chief Greywolf stood alone as bullets whizzed all around him and at his feet. His people were dying, just as the Tatonka had, for sport by the white man. He waved his hand over his head, signaling to all who could run to gather the horses. There was no time to gather food, clothing or blankets.

Those without horses ran beside us, then behind us and many fell to the ground, never to get back up. Those of us who caught frantic horses gathered around the chief as he spoke. “Go my people, to the forked river and wait for your brothers and sisters. Ride like the wind and do not look back. May the great spirit guide and protect you!” he said.

Suddenly he motioned for all of us to flee and the sounds of rifle and cannon grew fainter and fainter, until there was only silence. All those who had escaped were to wait by the river for two days. If no others arrived, they were to leave like leaves in the four winds. Our group was the only ones to make it to the river. For two moons we waited. We knew the pony soldiers had tracked down and killed the rest of those who had escaped.

With a heavy heart Greywolf held council as we gathered around him with empty stomachs. The chief spoke slowly, searching for the words he would speak. “My heart is heavy, like yours. We are not safe here. The white man has shown that his word cannot be trusted. We must leave this land and join other nations. I will lead you away from death. Help your brothers and sisters, be strong.” he said and he raised both hands to the Great Spirit as everyone prayed.

I Saw The Great Chief Only Once!

In the autumn of 1891, the great Chief Grey Wolf rode near, his people and their horses weary. Behind him were nearly twenty braves, women and children, many on foot. Their horses were thirsty from their long journey across the mountains. I did not know his language but I knew what they needed. The summer sun had been good to my garden and there was plenty to spare I welcomed him and his people.

That much he understood. One by one they brought their horses to the water trough. Just like their horses, his people were parched with thirst. None would drink though until the chief and his wife had drank first. There were no smiles in their eyes, no laughter in their hearts. I brought out what blankets I could spare and I laid them before the chief. They would need them when the cold north winds blew across the plains.

I brought baskets of food for them too because I saw they had nothing. Not just fresh garden vegetables, but also flower, salt, sugar and a huge cooking pot. The pot would feed many and I returned with as many bowls and plates as I could spare. There were tears in the great chief’s eyes for few white men showed kindness. Many ranchers simply fired shots at them, blind to the plight of the Indian.

I pointed to a large milk cow and waved my hand for them to take it. He shook his head no and his words though spoken in his tongue were understood. But I insisted and returned with Betsy and held out the rope to him and smiled. There were children and I had two milk cows, I surely could spare one. I watched as his wife took hold of his arm and whispered to him and he listened to all she had spoken.

Then his wife stepped forward and the look in her eyes, I will never forget. I had seen so many injustices done to other Indians and I wanted to make a difference. Chief Grey Wolf motioned to a brave and he quickly stood before him with respect. Suddenly, the brave was gone, but he returned and handed the chief a carving. With tears in his eyes and wisdom from years of leading his people he approached me.

Slowly he lifted both hands holding a beautiful wood carving and said the word; ‘Tatonka’, meaning buffalo. I accepted his gift as he turned to his people and I watched them set up camp some distance away. That evening, I prepared a hearty meal for his people and several of the women helped me. After they had eaten all they could, they sang a song and chanted around the campfire. But there was no dancing and as the night grew late, they laid down to sleep and dream.

When morning came, I was saddened when I stepped out of my cabin and saw they had left. They must have left in the night, yet I heard not so much as a whisper as my tears fell. Their future looked hopeless. The buffalo herds had long since been wiped out by the white men trying to starve them and force them to give up their hunting and fishing grounds and be placed on reservations.