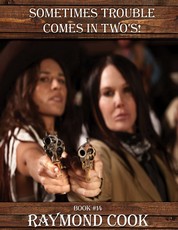 Sometimes Trouble Comes In Two’s © 2014 by Raymond Cook by is a 213 page story about Pepe Martinez and his family who raise and sell horses. After getting a federal contract to deliver 200 horses to Fort Collins, Colorado, his wife and four sons along with five ranch hands set out for Fort Collins. Pepe’s two daughters, Rosenda and Angelique stay behind to take care of the ranch. But after the horses are delivered, Pepe, his wife Maria and their sons are murdered by their ranch hands.

When Rosenda and Angelique receive word of their families deaths, at first they’re devastated before revenge fills their hearts. With the help of a gunfighter, the two women learn how to draw, aim and shoot very fast. They set out riding from town to town hell bent on catching up to each killer. Along their journey they will be           confronted by men who think they can take the pistols on their hips away from them. After a catholic priest traveling to the town of Rifle to oversee an orphanage leaves their camp, he is murdered by two fur trappers and an Indian scout.

Later, Rosenda and Angelique will find themselves being hunted by the same men. As the days turn to weeks and the weeks to months, both women are beginning to feel discouraged until they find one of the men they have been searching so long for. But hunting their family’s killers down comes at a high price as both women are shot. After they recover from their injuries, a wildfire cuts the women off in three         directions and they’re forced to flee into the rugged mountains to try to outrun the fires.

By the time they’ve killed the last three men who murdered their family, they take the reward money they were paid and search for a new place to set down roots. They choose to call the town of Marble their new home and have their house built. But their life isn’t complete until they can return to the orphanage and adopt two small children. Take a journey back into time and see through the eyes of Rosenda and    Angelique the challenges they face.

When Rosenda and Angelique Martinez waved their parents and brothers goodbye, as their family headed off to sell their 200 horses to the Army in Fort Collins in 1898, little did the girls realize they would not return. They were set upon and murdered by the very men their father had hired to help them, and the two sisters were         suddenly left alone in the world. Rather than wallow in self-pity, the girls, full of righteous anger, vow to hunt down the five men responsible for their family’s        murder.

In Sometimes Trouble Comes in Two’s by Raymond Cook, the main problem faced by the girls is that neither of them has any experience in guns or shooting. After       hiring a passing gunslinger to teach them the rudiments of drawing and firing a     pistol, the girls are finally ready to begin their journey of vengeance and justice. Two females, with Colts strapped to their waists, was a rare sight in Colorado in 1898. Rosenda and Angelique soon drew plenty of attention from both those upholding the law and those breaking the law as they traveled around the small towns of early Colorado, searching for the five killers.

The thing I liked most about Sometimes Trouble Comes in Two’s is the two main characters, Rosenda and Angelique Martinez, who as two strong female leads are not robbed of their femininity and their emotions by the role of “bounty hunters” that they have chosen to embrace. Author Raymond Cook does well to soften the harshness of the action and the violence with his two protagonists, who display their caring, understanding and nurturing nature often in the story.

The author’s style is very straightforward, simple and matter-of-fact, as the girls travel the roads and towns of frontier Colorado. In this sense, it is a very readable story and could appeal as much to young adults as adults. The premise of two          female gunslingers is rare and unusual enough in itself to capture a reader’s               attention and Cook does a good job of telling their story. If the author’s intent was to show the counterpoint between the generally accepted version of the “West” as a wild and lawless frontier with the idea that the majority of settlers were good, simple folk just seeking a quiet and peaceful life, I feel he achieved his result.

Sometimes trouble Comes In Two’s is my newest action-packed western frontier eBook. This eBook was uploaded onto Amazon on July 26, 2013. I’ve made this comment section so I can share with visitors to my website what readers feel about this particular eBook. To share your comments too, just go back up to the top of the page and click on the Contact Me tab.

All I can say to those who haven’t read one of Mr. Cook’s books yet is to pick this book first. I would hate to be one of the men these two gals are searching for. Talk about guts, determination and emotion captured by this author’s imagination! This is definitely a good read!